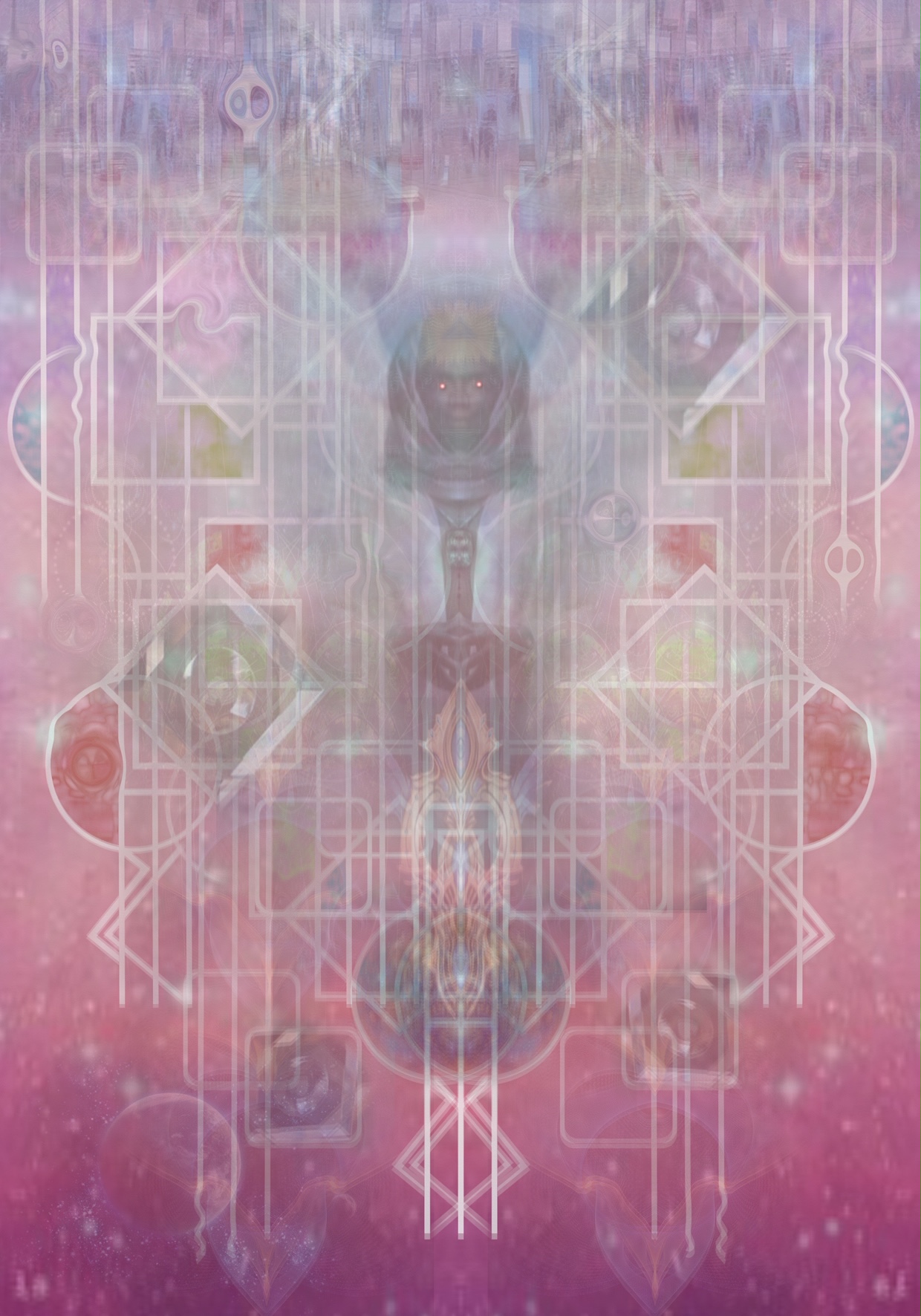 I have been receiving light language – in written form – for over ten years now though its something I have very rarely spoken about or openly used in any way.

It came to me in a moment of utter boredom when I was patiently waiting for my turn to talk during a conference in Greece. In order to stop myself from fidgeting – or falling to sleep – I began to doodle … thinking that this would look like I was taking notes … and the light language began to appear.

At first I didn’t think anything of it – just strange squiggles on the page but more and more of it came and I discovered that when I traced my finger along it words popped into my head and energy shifted both within me and outside of me.

Still – the thought of “light language” at the time seemed too strange – even for me – and although from time to time it returned, appearing in the background of my art work and tracing itself in the margins of my journals, I largely ignored it.

Recently I have been somewhat blocked in regards to my “visionary art”, I felt I had reached a wall with it and it was all starting to look rather samey. I looked back on what I had done fondly but didn’t feel there was any where to take it and doing more of the same made my blood run cold. I consulted the cards about it and they said – be calm, be still and in that stillness a solution will come and so – to the best of my ability – I took their advice.

Then just the other day – in the bath (as these things often are) inspiration struck and the lines – the light language – popped back into my vision! With a little time to spare I took myself to my computer and began to experiment and in no time at all this piece – the piece above – came!

Its no more than a practice piece really – fathoming out techniques and logistics, what to include and what not to include but as I worked Spirit spoke to me and outlined what they wanted me to do.

In time – with spirits helps – I will create a number of “set pieces” – light language talismans representing spiritual energies such as healing, grace, transformation, protection and awaken net etc. These pieces will be formed from a combination of Universal Language – colour, sacred geometry (both two dimensional and three dimensional), numerology, sacred symbols and the light language itself! Power pieces that convey energy and light into space, ascension icons that can be hung on a wall as a window into another dimension of energy brought into manifestation through frequency and form.

Later – Spirit say – I will – with their grace – offer to create individual pieces for people depending upon their specific need. Incorporating into the art work light langue that will tie the individual into the energy of the art through the power and numerology of their name!

So … for now this is a preview … a sample … a little something to share with you to get some feedback maybe, to see what your initial reaction might be. The finished pieces will be different – probably no literal figures in them and more symbols woven into the layers underneath and between the light language itself but this is enough for you to get the gist.

Needless to say I am excited! Which is something I haven’t been able to say about my art in while!

So … this just goes to prove that nothing is ever wasted and those ideas you had, images you saw, words that came into your head, dreams that arose as you slept may yet have purpose and meaning … in time! So whatever you do don’t throw away your diaries and journals, your note books and doodles because one day they might take on a new life all of their own!