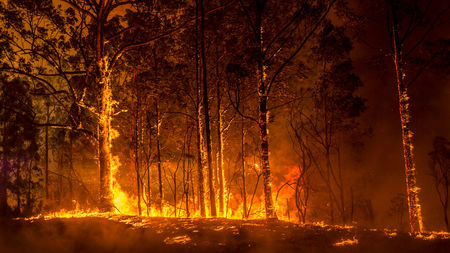 After all there is truth in this and the Alchemists – who considered themselves “philosophers of fire” believed this to be so.

However they also knew that Fire is a much more complex element than just this – it is an element of protection, illumination, passion and perception, an element of daring and surrender!

And it is here – in these last two qualities – that we might see the truth in regards to the way in which the element of fire might be used – by lets say … the Divine … to transform not just matter but rather the perceptions of all those who witness it in its extreme.

Now … mistake me not – neither the Divine nor the Great Mother would destroy the body of the Earth or sacrifice its children – animal, vegetable or humankind – in order to cleanse or clear or even illuminate BUT circumstances brought about NOT by divinity but humanity might be re purposed through the qualities of the element of Fire to underline something which mankind already knows and yet still refuses to do something about!

The masculine force of Fire – daring – encourages humanity you see to dare to take action – to dare to make changes – to dare to re envision a world where their proactive choices might yet make the difference which could see the world enduring, maybe even returning to a place of paradise which it once surely was. BUT in order to do this mankind will need to make sacrifices – to surrender – which is the feminine power of fire, those things that they have been all too familiar with, all too comfortable with in their past!

Mankind has – it is unfortunate but true to say – become all too comfortable with human suffering, something which yes they might lament but which too they can ignore. But the suffering of animals – poor unconditional creatures – who by no fault of their own suffer from a malady induced by mankind’s ignorance and wilful disregard – might just give them cause to pause and think and change!

I am not suggesting in any way that you should simply allow what is occurring, what has occurred and what yet might occur again – at this or any other elements hand. That you shouldn’t fight or pray or donate or do whatever you can BUT … what use is any of this if it does not lead to change?

Each person, each single individual has the power through their actions and attitudes – through the sharing of their ways to influence others AND the world directly. Through choices made concerning food and purchases, recycling and activism both verbal and physical in nature. HOWEVER that window is closing and NOW – NOW – not tomorrow or the day after is the time to act.

So … gaze into the flames and despair BUT let your eyes be opened by the light that your heart and spirit might be irreversibly changed!