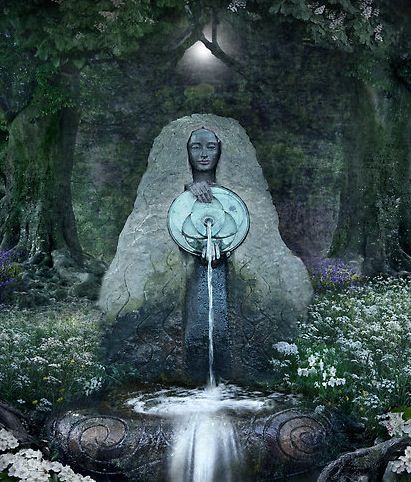 It’s strange – as someone who lived in South Yorkshire for most of his life – to hear the familiar names of the villages and towns mentioned on the radio and TV. Sad to hear why as the floods that have torn through those hamlets and villages has dominated the news, revealing in vivid details the sad tragedy of it all.

The River Don – which has burst its banks – passed through Mexborough where I used to live with my folks near to the train station – it always held a dark, dank and dismal energy and even on the brightest days looked menacing and unappealing. I never understood why anyone wanted to swim in there or live near to it. Dismembered heads and body parts were often found floating in its murky waters and its was a favourite place for suicidal souls to end their life – one of whom I used to go to school with.

Odd then that the river is named after the Goddess Danu – the great Mother Goddess of the Tuatha Da Dannan – the Irish Fairy Folk.

In this guise she probably represented the earth and its fruitfulness. Many place names in Ireland are associated with her, most notable the Paps of Anu in Kerry, which resemble the breasts of a large supine female, part of the land. She is the ‘beantuathach’ (farmer), which reinforces the fertility aspect of the goddess. Rivers are associated with her, and represent the fertility and abundance in a land. There is a suggestion that Danu might have had dual characteristics, one being the beneficent, nurturing mother goddess, and another being the strong, malevolent side of the warrior goddess. The root “dan” in ancient Irish means art, skill, poetry, knowledge, and wisdom.

I only discovered this long after I left Mexborough – if I had known when I lived there I might have been more open to the mysteries of those dark waters – rather than being simply scared – but thinking about it now – in light of what has recently happened I wonder if there isn’t a little of her magic a foot. This isn’t the first time the River Don has burst its banks flooding the land and the people and so spiritually one wonders why this might be happening again and again and again.

Is the river trying to cleanse itself of the stain it carries, the dark currents it holds which from time to time simply become too much for it to bare or is it bringing some trance fertility to the lands and people that it deluges – dousing them with fight and spirit and the power to grow.

In regards to the Tuatha De Dannan whom she adopted she is seen as having influenced them, nurturing these broken people back to strength, and imparting magic and esoteric wisdom to them. The Tuatha Dé Danaan are the clearest representatives in Irish myth of the powers of light and knowledge. In this story we can identify aspects of the nurturing mother goddess, the teacher imparting wisdom, as well as the warrior goddess who does not give up.

Maybe similarly she has taken it upon herself to help the people of South Yorkshire in a similar way, offering them through adversity the possibility of rebirth and renewal, tempering their metal and rebirthing them a new in her waters? I’m sure this isn’t how the people of South Yorkshire see it – not now at least – but who truly knows the motivation of the ancient and invisible Gods and Goddesses of the land and waters of our country?

All that we know is this … Danu was clearly a very powerful and fundamental earth goddess, from which all power, wisdom and fecundity of the land poured forth. She was a wisdom goddess of Inspiration and intellect (In this case she is very similar to the goddess Brigit, who is thought to be the same goddess with a different title). She was also a teacher, as she passed many of her skills on to the Tuatha Dé Danaan. She also had aspects of the warrior goddess too … as such then Though forgotten by the people who inhabit the land entrusted to her care – let alone the waters named after her – her spirit is still there, in the cold ripples, splashes and flows and as such in some way active – pouring forth her power and reminding man of her presence, power and grace. Maybe only in reflection we will see what magic she has wrought and what events she has set in motion, for the time being then let us pray for those people caught in the sway of her explosive power as well as praying to the Goddess herself that in time she might share the true reasons of her actions with us all!