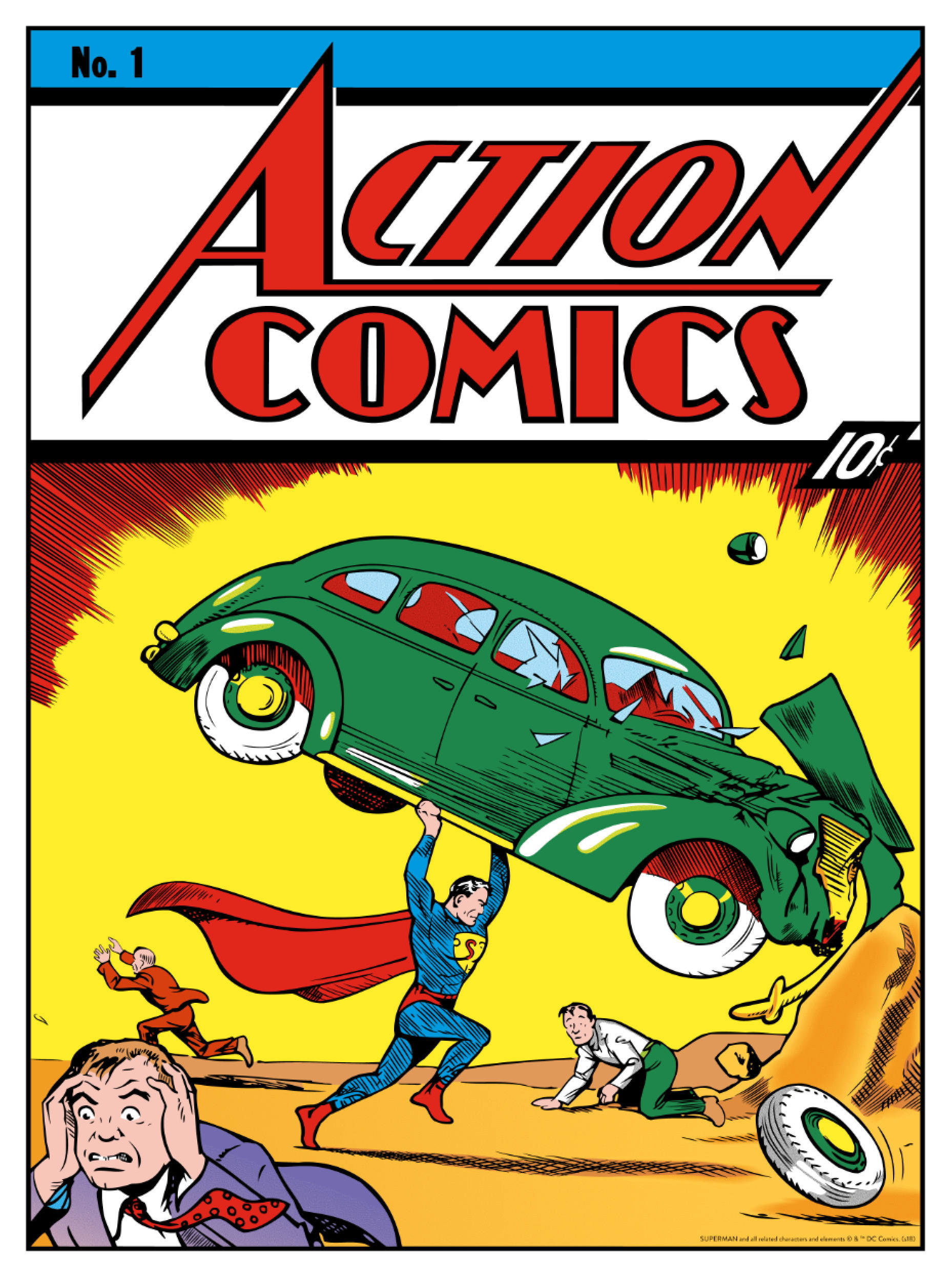 I am a HUGE comic book fan!

Have been since I was a small child, making pilgrimages to South Yorkshires ONLY comic book shop – The Sheffield Space Centre – with my brother – Graham – every Saturday.

Of all the super heroes I fell in love with Superman was – is and I imagine will ever be – top of my list and today (Thursday the 5th of June) is the 80th Anniversary of his first ever appearance in Action Comics!

You might wonder why I’m sharing this? What on earth does this have to do with anything spiritual – you might be thinking – and yet there are many things about super heroes in general – and Superman specifically – which are spiritual in nature!

Some for instance believe that comic book super heroes and villains are modern day representations of Gods and Angels – either consciously or subconsciously reintroduced into the collective consciousness in order to preserve the moral tales of the Gods of old.

They are after all archetypes – the hero, the villain, the damsel in distress – all these days females as well as male, multi ethnic as well as white and even gay, lesbian and transgender!

They represent different elements of our psyche – the genius, the fearful, the disempowered becoming empowered, the lost and forgotten finding themselves, the shadow, the hero, the anima and animus and inner child.

There are mystic super heroes like Dr Fate, Dr Strange, Zatanna and Constantine – elemental guardians of the planet like Swamp Thing and Poison Ivy – ordinary humans empowered by their need for justice like Batman AND Batwoman and even celestial beings like the Guardians of the Universe, the Watcher and Galactus who appear like Gods and Angels watching over mankind.

And then there is my hero – Superman – the mild-mannered reporter Clark Kent who is really the Last Son of Krypton – an orphaned alien adopted by  simple farm folk – the Kents.

Superman’s alien name is Kal El – El being as some of the know a Hebrew word which means “of God” – a word which can be found at the end of almost every Angel name … Michael – Hero of God, Raphael – Healer of God and so on and so forth. Is this then a coincidence? Well as Superman’s creators are said to have been Jewish maybe not! Maybe too the fact that Kal El becomes Superman – a phrase used in Nazi Germany – Uber Mensch –  by Adolf Hitler in reference to the perfect human that he hoped to create with eugenics being maybe a reclaiming of the power of this hideous dream for world domination into a hero that would fight for everyone – American, Jewish, English, French, Japanese and German alike!

Always described as fighting for “truth, justice and the American way” – something sorely needed now – in recent years new myths have become aligned to the story. The fact that the “S” of Superman’s chest is actually an alien crest from Superman’s Kryptonian family that represents HOPE – for instance being I think a truly lovely idea! This is voiced so beautifully by Henry Cavill in the film Justice League whose says when explaining the symbol to children … “… it’s meant to wind like a river – it comes and goes –  a man I knew used to say hope is like your car keys … easy to loose but if you dig around you usually find it …”

And speaking of Atlantis there is always Aquaman – recently portrayed in film by Jason Momoa – the – also orphaned – King of Atlantis which long ago fell beneath the seas!

And of course too Wonder Woman – the Amazonian Princess – half mortal half daughter of the God Zeus from Ancient Greek mythology. A powerful modern day role model for girls and women everywhere.

Super hero comic books then have come a long way from 60’s camp – they have always been secretly spiritual but in the past this was hidden beneath the high jinks and the adventure. Now they wear their heart on their sleeves tackling big stories head on and hinting – as ever – at so much more. I hope they continue to be an inspiration to children for generations to come – reminding us of the right thing to do, broadening our horizons and dreams for ourselves, opening our consciousness to the realms magical and futuristic and inspiring hope.

I still read comic books to this day and hope I will to the day I die, retreating in my dreams to a world of “Up, up and away” where there is never any doubt that the good guys win and that being kind and loving is the only way to beat back the darkness.