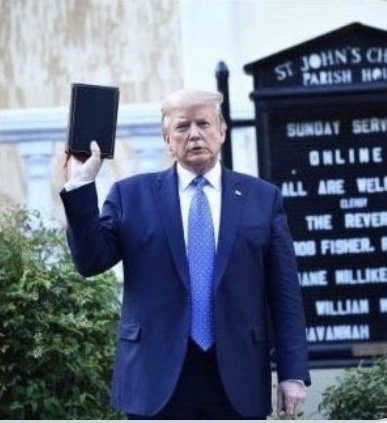 Those of you who know me are already aware that I am no fan of Donald Trump – in fact I would go so far as to say that I have always rather loathed him.

He is historically – not unlike our own Prime Minister – a recorded homophobe, racist and misogynist and although in the past I have half heartedly conceded that he seemed to play the role of the “dark shadow” – prompting reform and change by his outrageous acts I now find myself considering something that hitherto has been outside of my belief system – that the man might be simply evil!

In the past I have thought him a fool, a narcissist, a petulant dim witted child but now I find myself thinking … well – as we live in a polarised dualistic universe where there are Angels and Demons and the Brotherhood and Sisterhood of Light and correspondingly the Brotherhood and Sisterhood of Darkness why shouldn’t there then be those who have chosen to align themselves with the shadow as we light workers have chosen to align ourselves with the light? And as we strive to share our light and be seen – that we might spread the truth and possibility of ascension maybe then too those who work for the “bane” might instead choose to remain “hidden in plain sight” – endeavouring to entrench the world in hate and separatism and fear!

The lockdown has changed us all and during it I have found myself moving deeper onto my path as Cunning Man and spiritual alchemist, walking the crooked road of the Veneficium, distancing myself further from the path of transcendence in favour of the path of transformation.

Of course this doesn’t mean that I don’t still adhere to some – if not all – of the tenants of the Masters – the enlightened guardians and guides of mankind that my cunning ancestors worshipped as saints. And of course as a willing channel and teacher of their truth I will continue to offer their spiritual perspectives – like those meat eating cooks who preach the virtues of being good vegetarians.

But in some other areas it feels as though the scales have fallen from my eyes and that which has been around me in nature I see now reflected in mankind. There are poisons in the forest, fungus and rot that serves no life giving purpose other than to destroy and so maybe too there is in life also. Whereas once I would have ignored these fetid blemishes – choosing to transcend them – now instead I choose to gather them up and harvest them, putting their poisons to good use through the powers of alchemical transformation but in order to do this they must be seen and named for what they truly are.

And so what led me to this change of opinion?

When Donald Trump gave the order to clear peaceful protestors from outside St John’s Church using tear gas and rubber bullets the other day – so that he could stand with the bible in his hand for a photo shoot after speaking about the importance of law and order I could no longer see any good in him. How could this man – who claims to be a Christian – condone – let alone command – such force whilst holding the teachings of a man who stood only for peace and love? Surely this was the ultimate blasphemy – not the provocative actions of a “spiritual agent of change” but rather the mocking actions of someone whose heart and soul have been handed over to the darkness!

Still … maybe there is a lesson here for all of us – in regards to the temptation to hide behind our religion and spiritual beliefs rather than letting them shine a light upon the path that we have chosen to walk. For how many of us in the past have used our “beliefs” to avoid confrontation or turn a shy eye away from something that we did not want to see or face?

How many of us of us have justified horror and wrong doing with a trite “It was meant to be” or “It’s all part of the Divine plan” rather than choosing rather to recognise the situation as something that needed to be changed and playing our part – in what ever way we could – to contribute to that?

I know I have and I know I will endeavour not to do so anymore!

In alchemy it was believed that the intention of the alchemist effected the eventual outcome of their labour and so those who only sought riches for themselves would often fail because their intent was not pure. Whether or not Donald Trump is being used by the Universe to bring change is in many ways neither here nor there – what is important is that the intent of the man surely can no longer be seen as pure and so – with light – the darkness that he creates must be combated and the hate that he spreads neutralised with unity and love.

Whether you believe in good and evil or rather a universal plan transcendent of the comprehension of man do not – I entreat you – let your belief neuter your passion for contributing to change. I believe that now is not the time to sit idly by – allowing the drama of the world to play out – hoping that everything will fall into place and that the Divine is taking care of it all.

If we are truly to become “divine self realised” – masters of our own reality – architects of the new world then we must rise up in the face of tyranny and racism, homophobia, transphobia and misogyny, inequality and evil and play our part in building the reality we believe in. We must shine a light into the darkness that it might be seen and do what we can to make the changes we believe in.