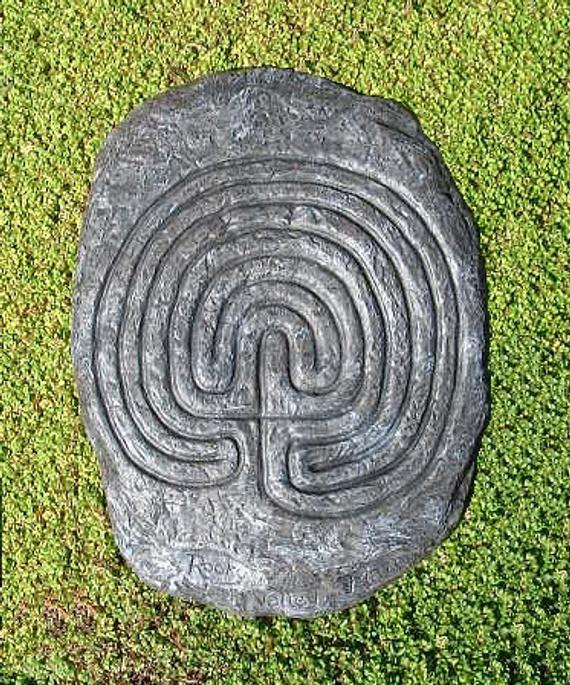 It’s Easter time and as the “lockdown” is still in enforcement we are all – quite rightly so – barred from enjoying our usual liberties over the Easter period.

For many this will be a challenging time when as either Christians, new age spiritual thinkers or Pagans they were used to gathering with the like minded to celebrate this sacred time of sacrifice, redemption, resurrection, fertility and new beginnings!

In the ancient days when physical pilgrimages were off the table – for financial reasons and reasons of practicality – labyrinths were used as an allegory for connecting to and aligning with God – the Divine – the Source. Walking them – if you could find one big enough – or tracing one with your finger tip being reflective of the spiritual journey – looping backwards and forwards as we move closer to the centre and core of our origin and beginning.

Labyrinth is a word of pre-Greek origin absorbed by Classical Greek and is perhaps related to the Lydian labrys (“double-edged axe”, a symbol of royal power, which fits with the theory that the labyrinth was originally the royal Minoan palace on Crete and meant “palace of the double-axe”), with -inthos meaning “place” (as in Corinth). The Labrys has become a popular symbol amongst feminist pagans representing the warrior Goddess archetype and so links the word labyrinth to the energy of the Goddess now too.

In Greek mythology, the Labyrinth was an elaborate structure designed and built by the legendary artificer Daedalus for King Minos of Crete at Knossos. Its function was to hold the Minotaur, a creature that was half man and half bull and was eventually killed by the Athenian hero Theseus. Daedalus had made the Labyrinth so cunningly that he himself could barely escape it after he built it. Theseus was aided by Ariadne, who provided him with a fateful thread, to wind his way back again. Greek mythology did not recall, however, that in Crete there was a Lady who presided over the Labyrinth. A tablet found at Knossos records a gift “to all the gods honey; to the mistress of the labyrinth honey.” All the gods together receive as much honey as the Mistress of the Labyrinth alone! Another allusion to THE primal unified Goddess being aligned and connected to this form.

Here too we see a lovely allegory for the human path through life – the winding thread – which leads us into the centre – back to the source and out again as we constantly yoyo back and forth through the cycle of incarnation!

The term labyrinth is often used interchangeably with maze, but modern scholars of the subject use a stricter definition. For them, a maze is a tour puzzle in the form of a complex branching passage with choices of path and direction; while a single-path (unicursal) labyrinth has only a single Eulerian path to the center. A labyrinth has an unambiguous through-route to the center and back and is not designed to be difficult to navigate.

Maybe then life is also something which was never meant to be difficult to navigate – complicated rather by mankind rather than the Divine!

A labyrinth can be represented both symbolically and physically. Symbolically, it is represented in art or designs on pottery, as body art, etched on walls of caves, etc. Physical representations are common throughout the world and are generally constructed on the ground so they may be walked along from entry point to center and back again. They have historically been used in both group ritual and for private meditation.

Interestingly one of the most famous labyrinths – the Rocky Valley Spiral as I know it and the one depicted above is also said to be reflective of the pathways of the brain – if you chop off the head like a boiled egg! Suggesting that when we walk this labyrinth with our min d or fingers we are journeying to the centre of our own brains – sometimes called the Cave of Brahma – where our connection to the Divine via a quantum portal is said to lie!

Labyrinths can be thought of as symbolic forms of pilgrimage then; people can walk the path, ascending toward salvation or enlightenment. As mentioned many people could not afford to travel to holy sites and lands, so labyrinths and prayer substituted for such travel. Later, the religious significance of labyrinths faded, and they served primarily for entertainment, though recently their spiritual aspect has seen a resurgence.

Many newly made labyrinths exist today, in churches and parks. Labyrinths are used by modern mystics to help achieve a contemplative state. Walking among the turnings, one loses track of direction and of the outside world, and thus quiets the mind. The Labyrinth Society provides a locator for modern labyrinths in North America and other places in the world, including Australia.

The prayer labyrinth, also known as a meditation labyrinth, is one of the oldest contemplative and transformational tools known, having been used for many hundreds of years for prayer, ritual, initiation, and spiritual growth.

We may not be able to wonder this Easter – out into the green – off to Church – to our gatherings, moots, groves or coven meetings BUT this doesn’t stop us from wondering within – the core and centre of our being where the Divine lies. For ultimately it is here that all our answers lie – within – not without. Use then the power of the labyrinth this Easter to set you free, to journey to a place which is never in lockdown – the soul, the centre, the Divine!