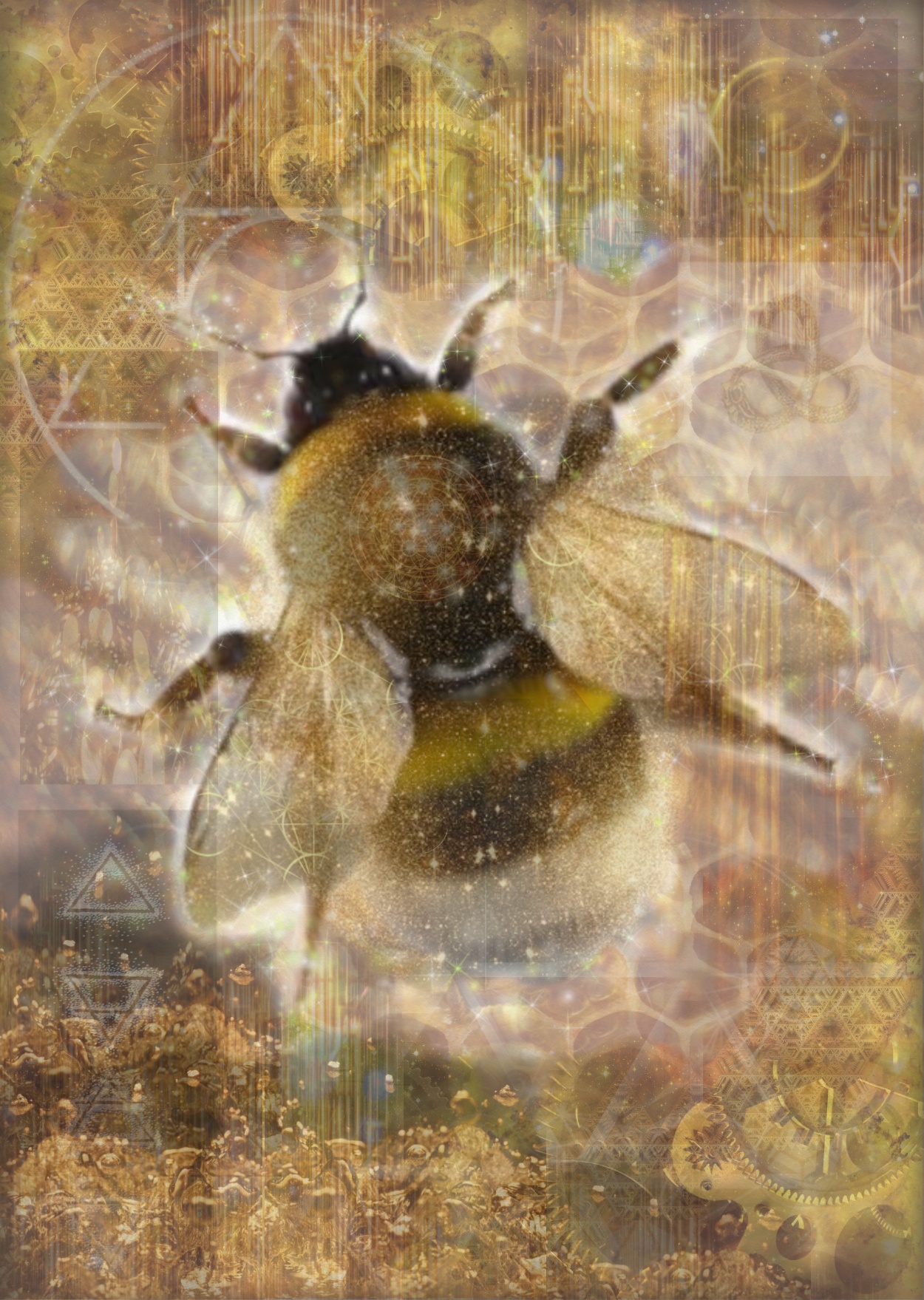 **I was reminded recently of this channelling – done way back when – from Laurentis – the Lemurian Bee Shaman! Reading it from inside 2020 it seemed to take on a new resonance and meaning – enjoy**

I am the Spirit of the Shaman of the Bee Larentus and I come to you, to your unconscious call, to lend my insight, my understanding and truth to all that which you know and that which you have been taught in order that you might be more … complete.

I come from an ancient time, a memory that was known so long ago that now it is almost dissolved completely, like star dust ground into the drifting nebula clouds of space, no more than a bitter sweet taste of ancient honey in the oh so ancient Eathers of the past. From beyond the shining city of Atlantis do I come, from the ancient flowering lands of Mu, Lemuiria the good lands of dreams and love and hope. For I am the shaman of the ancient people, the first shaman to have ever been, he who stood between the worlds and helped hold them both close together as one. I am the Shaman of the Bee.

It might seem strange to think that in this ancient place, spoken of so sacredly by some and with such disbelief by others, that there was either bees or shamans but indeed there were both and much more besides. It is hard to explain what it was like, Lemuria, Mu … for there are no words left in your language to describe some of the things that existed there, those glorious wonders of Eden long since lost forever when ancient Atlantis was young. Lemuria was paradise, tropical and dizzying in its beauty, exquisite and exotic, full of colour and teeming with life, a great abundant jungle forest of flowers and tree’s ever in bloom and ever growing in perfect love and harmony with each other. Try to imagine a place that had not yet heard of death, did not have the need for pain or competition, for greed or anger or fear. A place of constant, slow, unending, unfurling discovery … a true place of wonder!  And in amongst it all there was me, the shaman of the Bee.

The bee was a sacred creature in Lemuria for long before anything else had need to create anything other than itself it was the bee that organised its community into forming a home and starting a civilisation! From this humble animal then other creatures and of course the Lemurians themselves, followed suit and seeing the wonder and the necessity of being self responsible and industrious in this way formed homes and civilisations of their own. By observing the ways of the bee – caste systems were formed, in harmony and love, depending upon physical, mental, emotional and spiritual capability. The Lemurians marvelled at the way in which the bee’s seemed to be able to manifest things from nothing, the honeycomb of their hive and the hive itself as well as the beautiful golden deposits that they seemed as if by magick to extract and manifest from the flowers and plants about them. Of course the angels explained what all this was, how it came about but that seemed to the Lemurians not to be less wondrous but in fact more so. That these tiny creatures, surrounded only by abundance felt the compulsion, the need to manifest, to transform, to alchemise in such an incredible way.

Way back then I was no more than one of the many others but my curiosity always strong led me to study the bee’s further and in so doing to blend my consciousness with their own, learning their secrets from the soothing buzz of their busy song. Soon I was piggy backing my consciousness to their queen and sliding deep into the secret chambers of the hives royal family. Sleeping with the incubating eggs and hatching with the rest of the larva punch drunk on royal jelly spoon fed by the great mother herself. All of a sudden the secrets of alchemy, of manifestation and transformation were mine, the knowledge of hibernation and herbs, of sacred geometry and the other world that bee’s would journey to, had always journeyed to interconnected as they were to the greater plan of continuance and ever lasting that the Divine had for the Earth once the blessing of eternity was lifted and death cast its shadows into the land. So I was and so I died and so I am now, for I never lived again after that time but remained a ghost, a spirit informing the people of the land that followed my people of the ancient truths that they would need. So that they might recognise the importance of the bee and remember how to farm them and encourage them and seek to emulate their magick in time to come. Playing my part in the Divine’s great plan as the bee’s played theirs.

I suppose then you might call me Master of sorts, though I am older than any collective that exists and will never be part of any other hive mind other than that of my precious bee’s. I suppose you might call me teacher, you most certainly may call me friend for this is not the first lifetime that you have had in which we have known each other, of course not. For I have danced through your dreams many times before and hummed you to sleep when you have wished for change, bringing the gift of alchemy to your tired lives. And I return now to guide and advise you in those areas that you seek to go further in now, further than many of those around you who simply seek to swallow and accept that which they have been told, which is of course true but not complete not by a long, long mark. And so I come that I might rekindle the knowledge of who I am and of what was and to begin to show you the ancient truths of the bee’s magick, way and light. It is then with a little of this that I will end, for to give too much in one go is not the bee’s way and not mine ever, far better the stretch that was is held in store in order to ensure that the pallet values what it tastes and never runs out of that which it desires. So … here is a taste of the bee’s magick and truth.

Have you ever wondered how they manage, the bee’s, to ingest so much sweetness without being destroyed by its heady grandeur? Oh granted sometimes the bee’s swoon, merry and drunk but the most of the time they manage well enough despite being so deep in the sensual sexual juices of all those desperate plants, reaching out for procreation with their deadly tempting intoxicating smells and pleasurable tastes. It is the poison, the sting in their tales; the bees convert that which they cannot cope with, the excess (and there is plenty of it) into death. It is the only way, a way that works perfectly in a realty so bound by the law of duality. Their poison is their salvation and their protection, it is their mechanism for life and this is why when it is lost they are too, for without it they could never cope with the sweet love of the plants life forces. There is a lesson here, or at least the beginnings of one, for alchemy works both ways you see, life transformed to death and light transformed to darkness. The sting to the sweets of nectar and the nectar to the bitter pill of the toxins of the sting. Man possesses this power too and would do well to use it, if only they could remember how. But enough of this for now, this is enough, just a taster of things that are to come.

So … my sweet little larva be well and may the blessings of the Summer Mother be upon you.