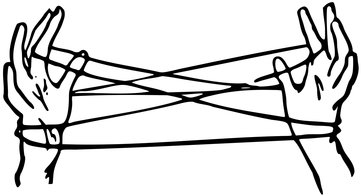 Spiritual entanglement is caused as a result of sympathetic resonance – the process whereby an individual “vibrates” at the same frequency as another person causing a psychic bridge through which energy and information can be shared.

Resonance is created – in this way – through empathy, compassion and sympathy, when an individual has experienced something similar to that which the person they are “resonating with” has.

As a result of this spiritual entanglement can occurs – the resonant alignment no longer being a temporary state – as it is with attunement – but rather becoming a more permanent one as the sensitives energy becomes intertwined – entangled – with the other, creating a psychic attachment which is not intentional or beneficial to either.

This process can lead the sensitive to become drained, absorbed and preoccupied with the other, polluted and weighed down by their “stuff” and – in some circumstances – the other becoming energetically addicted to and dependant upon the connection!

This can lead to such states of preoccupation as to cause obsession and such extremes of energy drain as to produce symptoms not unlike M.E.

This can occur not only between people but also between the sensitive and a situation, a place, an object and even a house – if the memory energy or thought form around the object or situation is strong enough. Needless to say this can seem VERY odd indeed – for both the sensitive and those living and working with them.

In order to shield themselves from such occurrences sensitives need to master detachment and healthy – therapeutic distance! Something which is not easy and often interpreted as arrogance and aloofness BUT it can be the only thing that will keep the sensitive safe.

My empathy – my sensitivity makes me particularly vulnerable to this and I find myself entangled with people, organisations, situations and objects and places ALL THE TIME! It is something I am constantly working on.

For me it creates a kind of obsessive behaviour and certainly an obsessive state of mind – something which is not healthy for me or those whom I live with! Recently in order to combat this I have taken to practising two things …

Calling upon the Archangel Cassiel – THE Angel of dis-entanglement and therapeutic distance AND using a little spell/chant for when I find myself obsessing.

Cassiel is an EXCELLENT Angel for this, by regularly placing ourselves within his care he can pick apart our tangled energy gently and lovingly without causing any harm to either yourself or the other that you have become intertwined with. This may take a wee while – a month at most – and is easier to achieve under a waning Moon BUT its well worth the persistence, effort and surrender.

I cut the ties that bind and set us free.

That to which I was once concerned

I will no longer be

By winds that blow

I cut the ties that bind and set us free

That to which I was once concerned

I will no longer be …

Entanglement can be serious, damaging and potentially dangerous to your mental and physical health. Be warned sensitives and take heed and do what needs to be done to set yourselves free.