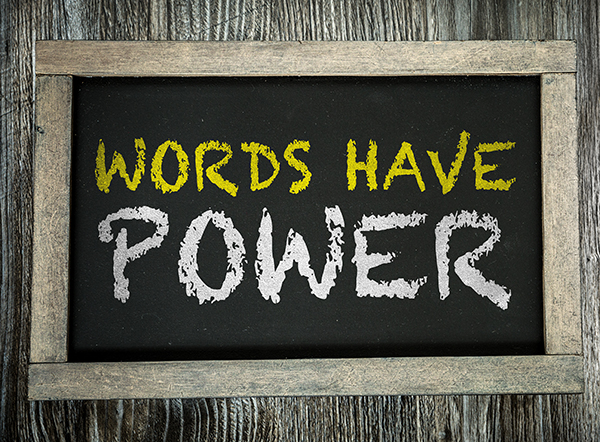 The other day I was horrified to discover that a post I had placed – on a particular network rail train companies facebook page – had been trolled!

The reply to my post – from some stranger who I had never encountered before on Facebook (and possibly judging by his profile page a fake account created by someone who wanted their true identity to remain anonymous) used very abusive and offensive language to describe how stupid I was in complaining about something which was – they believed – more my fault than the train companies!

I was astounded firstly that the comment had effected me so intensely and secondly than anyone would have the time to scroll through the comments on a train company facebook page, so that they could defend said company in such a ferocious way!

I’m writing because the whole situation made me think about the power of words, the way that they effect us – because of the energy invested in them by the person who creates them AND because of the power that we give to them because of our conditioning and how maybe we – all of us and most definitely myself included – have to learn to shield ourselves from them better and use our own more wisely too!

Words are powerful! they are a direct manifestation of thought and whether they are spoken or written can be invested with energy – aimed at the person to whom they are addressed – to great effect! But we are also partly responsible for allowing them their effect by the way that we receive them – some capable of brushing such things off and the more sensitive or vulnerable more easily effected!

As a recovering victim of bullying – I was bullied solidly for 6 years at school and 6th form college and probably at one point number three on the list of most bullied person at school, the first later having killed himself and the second getting off considerably worse than I did with both a broken nose and arm – I find now I am still effected by people “having a go” at me! Usually it makes me mad and I find – these days – its VERY difficult for me to walk away from a fight if I feel I have been unfairly treated. Responding in a way now that I couldn’t back them – for fear of my life!

Granted in recent years I have learned to deal with this better and pick my fights more carefully, sometimes letting it go, sometimes seeing the other persons point or my part in the misunderstanding, sometimes simply thinking what does it really matter what other people think! But sometimes – like with this incident – I am effected and the scared, frightened, terrified little boy in me emerges – fearing for his life!

I realise that this is partly due to language – in the house in which I was raised certain words were common place – bugger, bloody even in extreme cases pissing this and that BUT some words like fuck and bastard were absolutely off limits! This were the worse of the worst words in existence and when they were said it was super – SUPER – serious business! I now days occasionally use these words myself when frustrated but if they are used against me – I realise – they still have the same impact that they did back then.

Me adding power to the words!

I also realised – when contemplating this whole sorry affair – that the words I used when complaining were snarky, snippy and sarcastic … I was “pissed off” you see – and that in a way this energy – that I put out to the Universe – came back to bite me on the arse times three – as is the way with energy! So part of this is on me and a good reminder to be more mindful with the way in which I use my words and power – even when complaining. As someone famous (whose name escapes me) once said when asked how they were going to deal with an issue “Firstly I’ll see where a little kindness gets me and then I’ll take it from there!”

I also realised that even when I am at home – in my bubble of bird song and silence and space and no people (MY BUBBLE OF BLISS) I need to be on guard when scrolling through Facebook or Instagram or reading my Emails or listening to the radio and talking on the phone. Because it is when you are most relaxed that you are most vulnerable and at risk!

In conclusion then – WORDS HAVE POWER – lets all try to use them in whatever way we do with a little more awareness whilst remaining safe and protected from those that won’t and don’t!