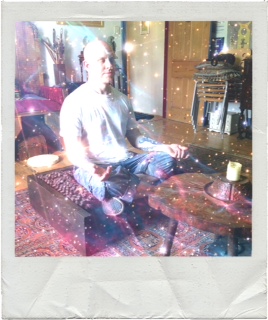 My first recollected experience of clairvoyance was when I was five years old, my Grandmother – who had been in Spirit for a couple of months – appeared before me at school – the by the rack of Lady Bird books – smiling. I told my teacher who was sympathetic but dismissive and I told my Mum who told me this was my imagination.

From that point on the visions flowed – wizards dressed in long white robes patrolled the playground and God (and Mrs God) were seen in the sky! Ghosts and their families came and went along side genies and speaking weather clouds (elementals both) and I happily went along with it knowing that it was my “imagination” but not knowing that it was meant to stop or that I was the one meant to be creating these flights of fancy.

When it was time to go to “big school” I realised that no one else could see the things I could and so from one day to the next everything simply faded away. It was only years later – aged 16 – that I realised what I had been able to do and so – laboriously – I began to sit to open the door in my head I had four years ago slammed shut.

It was not an easy task – every day for a year I sat staring into my crystal ball – the one my parents bought me for my 16th birthday – for half an hour every night until finally a vision came – a beautiful butterfly that filled the sphere with its luminous wings! I nearly fell off my chair with delight – after that the images began to flood back through.

In time I learned to see in my minds eye and with my eyes open abandoning the crystal ball entirely and I began to use my new found ability – which I was rather astonished to discover was clairvoyance – for myself, family, friends and eventually others. Then I got lazy … my vision was fine, I could see auras and chakras and meridians and past lives and angels and masters and spirit guides. Seeing the Earth bound was a daily occurrence and I thought my vision had peaked but in truth I had become complacent and fat and lazy – clairvoyantly speaking.

Up until recently that is …

Recently I have been guided to renew my efforts in developing further my sight and following spirits guidance – plus some teaching from Djwal Khul brought forwards by the AMAZING Alice Bailey I have managed to push my sight further than ever before.

This week I will be releasing some new readings called “The Seeing” where I will use this “trans-dimensional” clairvoyance for the first time. A form of clairvoyant sight that enables me to see – from the inside out – the energy system of a client! Seeing not only their holistic state but what is also occurring for them on a trans-dimensional level – in between the spaces that lead and connect them to their divine – the Higher Self  – the Soul!

I’m not claiming necessarily that trans-dimensional seeing is unique to me – heaven forfend the hubris no! Others may already be seeing in this way and simply call it something else, seers, prophets, priestesses and shamans very probably have used such sight for thousands of years BUT this is new to me and so I am SUPER excited (at last) to be moving forwards in this area of my spiritual life and to be sharing the fruits of my efforts with you all.

If you are interested in booking a seeing then go to my website and do not despair if all of December and Januaries slots have gone as there will be more slots released for next year.

Maybe I will “see” you there!