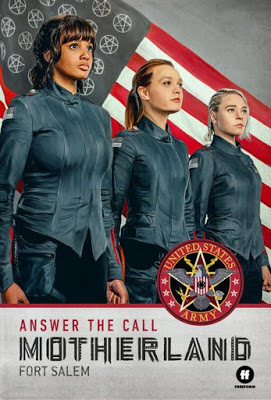 I thought it was time to lighten the mood and so todays blog is a TV show review/recommendation!

On paper Fort Salem sounds biscuit barrel barking bonkers and pretty terrible – and yet something about it really works!

Set in an alternate reality where witches are not only real but valued within society the premise of the show focuses on a world where magic users have been conscripted into the armies of the globe in order that they might use their magic to keep the planet safe from terrorists and war!

Springing forth from a seemingly immortal witch – now a general in the American army – who revealed her powers to the world in order to save herself from a hanging and at the same time made herself invaluable as a military asset. The show centres around three new recruit witches – a healer (fixer) a clairvoyant (scryer) and a fighter (a legacy from a long line of notable witches dating back to English/American war).

Through their “basic training” we are introduced to a rival group of terrorist witches – the Spree – who seem to be the main protagonists – whilst also being introduced to the witches world – a very well researched world – where witch myths and genuine practices have been updated and integrated into this cleverly put together reality.

From a nod to genuine Wiccan sabots, to weapons used by the witches based upon traditional witch implants (the scourge) to cleverly modernised witch myths like the witches flying salve this little gem of a show never ceases to please. even making passing references to the spirit world, glamourey, the witches ability to “sing up a storm” and a refreshing glimpse as a matriarchal universe where the goddess is acknowledged and the male witches acknowledged but given a lesser role to play.

What helped I think – apart from the great special effects, beguiling actors and wonderful plot twists – was a real echo of the world in which we live, where – despite their use – the supernatural beings are still viewed with suspicion and fear by those they serve and visa versa the humans looked down upon by the witches themselves – not to mention the political and military struggles for power.

There is also a lovely nod to something more ancient and forgotten which even the witches themselves hunger for in a rather abominable way!

Available to stream now from BBC it is in my opinion well worth a watch and excellent for anyone who likes a little magic with their drama – go on – give it a go … you know you want to!